Losing His Religion: Krugman and the Neoclassical Synthesis

Recently, Kevin O'Rourke argued about benefits of trying to understand economic history. One may add the history of economic thought as an addendum to O'Rourke's piece.

Today Krugman goes further by aiming his quill not only at the Freshwater patriarch Friedman but at the departed doyen of Saltwater economics, Paul Samuelson:

But the experience of the past 6 years, since the financial crisis began, has blown apart not just Friedman’s position but much of Samuelson’s as well.


First of all, the liquidity trap is real; conventional monetary policy, it turns out, can’t deal with really large negative shocks to demand. We can argue endlessly about whether unconventional monetary policy could do the trick, if only the Fed did it on a truly huge scale; but the fact is that the Fed hasn't ever been willing, or felt that it had sufficient political room, to do that experiment.


Second, while the evidence from austerity programs strongly suggests that fiscal policy does in fact work, with multipliers well above one, the political economy of policy turns out to make an effective fiscal response to depression very difficult.


So the neoclassical synthesis — the idea that we can use monetary and fiscal policy to make the world safe for laissez-faire everywhere else — has failed the test. What does this mean?


What’s more, you have to ask why, if markets are imperfect enough to generate the massive waste we’ve seen since 2008, we should believe that they get everything else right. I’ve always considered myself a free-market Keynesian — basically, a believer in Samuelson’s synthesis. But I’m far less sure of that position than I used to be.
(Krugman 2013) (emphasis added)


To my point about the need of history of economic thought, let us take a look at Samuelson's position:

Modern democracies have the fiscal and monetary tools, and the political will to use them, to end chronic slumps and galloping inflations. This gives us the neoclassical synthesis: the classical principles of microeconomic pricing…are thus validated by successful use of the tools. (Samuelson 1963:339)


But as (Togati 1998:141) shows, Samuelson, who was considered a 'Keynesian' in the traditional media, was inconsistent with the economics of Keynes, particularly with respect to Keynes's structural stability analysis:

...Keynes’s stability analysis departs from Samuelson’s concerns the assessment of policy interventions. Keynes’s emphasis on the instability of the key parameters contradicts Samuelson’s view that a smooth transition from depression to full employment is possible, given the simple choice of the right policy mix. The crucial point he makes in the General Theory is that policy may itself cause instability in those parameters so that the task of pushing the system to full employment is never a mechanical one. Thus policy-makers may fail to reach this goal, if they are unable to shape agents’ conventional views:


Thus a monetary policy which strikes public opinion as being experimental in character or easily liable to change may fail in its objective of greatly reducing the long-term rate of interest… The same policy, on the other hand, may prove easily successful if it appeals to public opinion as being reasonable and practicable and in the public interest, rooted in strong conviction, and promoted by an authority unlikely to be superseded.

The crucial bit to take away is that there is a corpus of economic history and the history of economic thought behind everything written in the blogosphere and via the distribution channels of traditional media. The fact that it is not covered in the training of economists is a failure of the profession.  As my prof Perry Sadorsky emphasized during MBA lectures concerning macroeconomics and the efficacy of stabilization policy, there was an industry in the hermeneutics of "what Keynes meant" in the aftermath of his most noted work, The General Theory. It is incumbent on any reader to not take anything they read at face value: facts cited by anyone, from winners of the Sveriges Riksbank Prize in Economic Sciences to purposeful amateurs looking to add to the discussion, are invariably entangled with values and assumptions.

This blog does not take the view that economics --in any manifestation-- is an objective reality however it becomes a very useful lens when considered in concert with politics, power, and the role of institutions (in the Old Institutionalist à la Veblen, Commons, Weber rather then in the New sense) in a modern economic system. 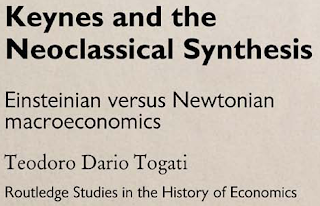