The Growth In Part Time Work Is Here To Stay

While being in a temporary job is an indication of a person being in a career-less job, that is not always the case. Indeed, those we are calling proficians exult in a project-oriented existence in which they move from one short-term project to another. And long-term jobs in which someone must do the same few tasks over and over again are hardly aspirational. Having a temporary job is fine if the social context is satisfactory. But if the global economic system requires a lot of people to have temporary jobs, then policy makers should address what makes them precarious.
Currently, having a temporary job is a strong indicator of a kind of precariousness. For some it may be a stepping stone to the construction of a career. But for many it may be a stepping stone down into a lower income status. Taking a temporary job after a spell of unemployment, as urged by many policy makers, can result in lower earnings for years ahead (Autor and Houseman, 2010).
Once a person enters a lower rung job, the probability of upward social mobility or of gaining a ‘decent’ income is permanently reduced. Taking a casual job may be a necessity for many, but it is unlikely to promote social mobility. Another avenue into the precariat is part-time employment, a tricky euphemism that has become a feature of our tertiary economy, unlike industrial societies.
In most countries, part-time is defined as being employed or remunerated for less than 30 hours a week. It would be more accurate to refer to so-called part-timers, since many who choose or are obliged to take a part-time job find that they have to work more than anticipated and more than they are being paid for. Part-timers, often women, who step off a career ladder, may end up more exploited, having to do much uncompensated work for- labour outside their paid hours, and more self-exploited, having to do extra work in order to retain a niche of some sort. The growth in part-time jobs has helped conceal the extent of unemployment and underemployment. 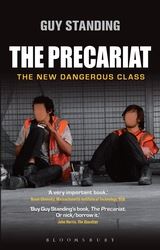