CAD as petro-currency - more than meets the eye

Currency markets are back with a vengeance – much to the dismay of former FED chairman, Paul Volcker, Nobel laureate Robert Mundell, and the departed icon, John Maynard Keynes, all of whom at one time or another have advocated one world currency – and nowhere is the psychology of the national currency tied more to a nation's sense of well being than in Canada. The loonie has long confounded the prognostications of professional economists and strategists; it is a microcosm of the FX market – not one story prevails ad infinitum, there are always multiple drivers (be they technical, fundamental, or based on fund flows).

The Globe and Mail Economy Lab dated March 7, 2011, carried a provocative heading heralding the Loonie no longer a petro-dollar. It cites Marc Chandler's views on the breakdown of CAD correlation with oil prices. Mr. Chandler is the Global Head of Currency Strategy at Brown Brothers Harriman & CO; he knows what he is talking about and taken in isolation, his views are valid.

But we need some context. The point I am trying to make today is that the CAD-Oil relationship has always been thus: beyond $100 per barrel, the correlation of CAD to oil is non existent but beneath it, the relationship remains valid and should be an integral input to anyone's CAD outlook. As a picture is worth a thousand words, let's elucidate this discussion with some charts. 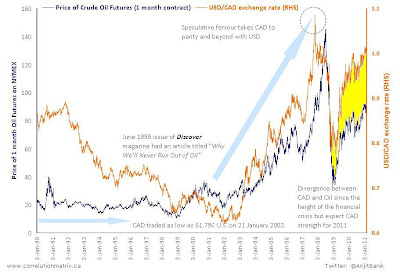 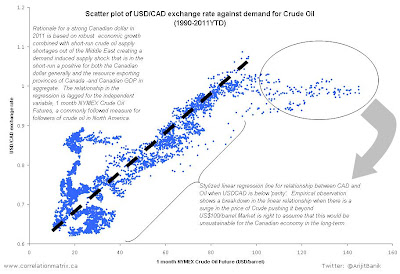 For the sake of a bit of rigour, here are the regression figures (Exhibit 3 & 4):
The relationship in the regression is lagged for the independent variable, 1 month NYMEX Crude Oil Futures, a commonly followed measure for followers of crude oil in North America. 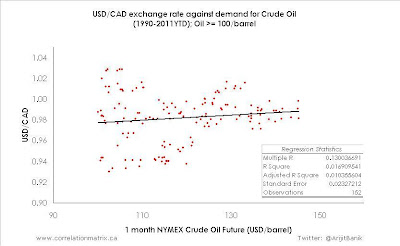 To add some nuance, here are the regressions since 2000. 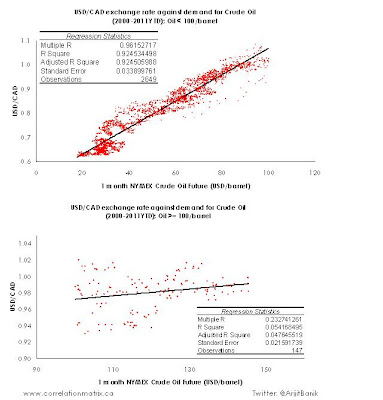 Takeaway for CAD for the remainder of 2011.
Over the past fortnight, we have witnessed tensions in the Middle East erupt with a long overdue exercising of democracy in Tunisia and Egypt, and the attempted ousting of a despot, Mohammar Quadaffi, and the subsequent entrenchment of civil war in Libya. Naturally, this has meant uncertainty in the flow of Libya’s sweet crude to Europe – hence the spike in North Sea Brent. WTI, the North American benchmark, has decoupled from Brent but has not been immune to speculation – this has meant a strengthening CAD in the past and is witness today of CAD highs against USD last seen in 2007.

Rationale for a strong Canadian dollar for the remainder of 2011 is based on robust economic growth in the domestic economy – the Bank of Canada is counting on GDP growth to come from business investment and a closing of the output gap by the end of 2012 – combined with short-run crude oil supply shortages out of the Middle East creating a demand induced supply shock that is in the short-run a positive for both the Canadian dollar generally and the resource exporting provinces of Canada – and Canadian GDP in aggregate.

Trees don’t grow to the sky and neither can CAD.
As shown in Exhibits 3-5 when Oil has exceeded USD 100/barrel the relationship breaks down.

Is CAD strength a drag on non resource exports? I believe so. This could be due to greater demand elasticity for manufactured goods; the idea of higher resource costs acting as a tax and reducing consumption in the U.S. when Americans confront $4 a gallon gasoline. Moreover, a persistently stronger CAD makes Canada’s exports uncompetitive which is untenable given the country's long running productivity challenges. But these inputs work their way through to the macroeconomic numbers with a lag. The entry of 2 billion consumers – and their demand for the spoils of Western style consumerism – dispersed amongst the BRICs simply complicate matters.

FX cannot be seen exclusively through the prism of an an equilibrium value – as strict disciples of neo-classical economics are wont to do, hence their advocacy of a random walk – any forecast of a currency pair must take into account short, medium and long term factors. In relation to USD, those short and medium term factors weigh heavily in CAD's favour.

USD remains a safe haven and is viewed as such when the risk off (risk aversion) trade is in favour but… all signs point toward USD weakness in 2011: