ECB: Where to next?

ECB President Jean-Claude Trichet turned markets on their heads on March 3 by transforming what was expected to an inconsequential meeting – in terms of ECB future policy guidance – into a clearly articulated statement of an impending rate hike in April (see chart below).

This was ostensibly a signal that the ECB would be willing to act now in order to stave off potential second round effects of the commodity induced inflation that is prevalent in the developing markets and slowly but pervasively seeping into developed markets through a higher cost of living in terms of everyday goods (and often excluded from the so-called “core” items used as a nominal anchor by central banks for inflation targeting).

Trichet kept to his word (and maintained a modicum of credibility); the swap markets have factored in 75bp in terms of tightening for the remainder of 2011.

The nature by which these hikes will occur will be a topic for debate but slow, steady and a very gradualist approach is likely given two important issues that are not going to disappear in the short term:
a) how will the overhang of the Euro periphery’s sovereign debt crisis affect the viability and capital positions of Eurozone's financial sector
b) how will ECB create policy for an increasing divergent and two-track Eurozone (see chart below): 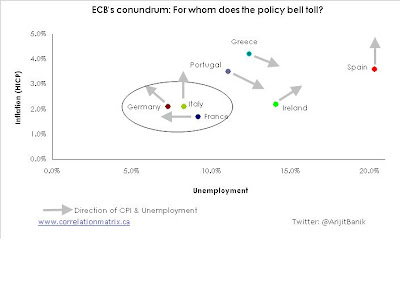 Your scribe is betting that the ECB will defer to the Teutonic influence and set rates for Germany's benefit and quell inflation with the political quid pro quo that Bundesrepublik Deutschland will compensate peripheral states suffering from credit downgrades, fiscal austerity and grinding disinflation due to inappropriate monetary policy. The political cost will be high for Frau Merkel but a necessary evil in the absence of a formalized fiscal transfer mechanism; the EFSF morphing into the ESM with putative governance of sovereign nations' fiscal spending plans is nothing but political legerdemain but the intelligent yet removed bureaucrats in Brussels.

The Euro is not going anywhere – the tales of its demise have been exaggerated – as it is the currency equivalent of a dysfunctional family who will stay together for the sake of the greater good. Under this analogy the US greenback would be the materially successful uncle with a serious substance abuse debt problem not wanting to get into a 12-step program and unwilling to make the difficult decision to take the first step.