Why are these dealers so optimistic... 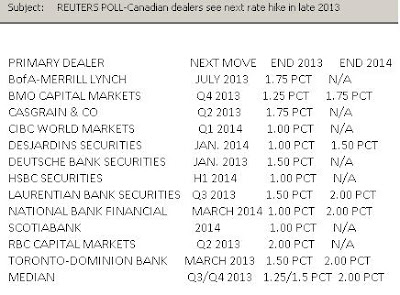 ...about upward movements in the BOC rate? Perhaps Canada's growth story is a lot stronger than I imagine or perhaps there is an underlying tendency to believe in "rate normalization" --essentially the idea that central bank rates and inflation plus a premium -- and "equilibrium rates" will return.
If the latter then how about the idea that we are in a new "bad" equilibrium, with a long term secular trend of low rates given the headwinds of household debt crimping consumption, demographics, a challenged financial system, and slower growth in credit in the developed world? 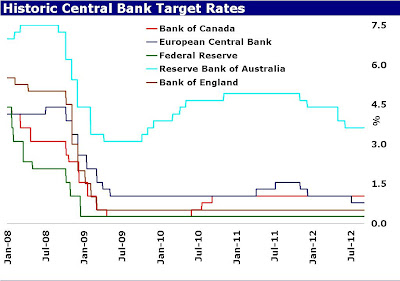 Simple expansion of central bank balance sheets will not create the rise in "core CPI" that central bankers use as a nominal anchor; there certainly is, to paraphrase Kyle Bass, "inflation in the things we need and deflation in the things we own" but not inflation via the wage spiral due to diminished bargaining power of labour. And for those concerned about hyperinflation here is an account of the German hyperinflation of the 1920s available here.
Posted by Unknown at 3:35 PM