Good piece in Foreign Affairs titled The New Great Game - A Battle for Access and Influence in the Indo-Pacific by Rani D. Mullen (Associate Professor in the Government Department at the College of William and Mary, Virginia and Director of the Indian Development Cooperation Research (IDCR) at the Centre for Policy Research, New Delhi, India) and Cody Poplin (Research Assistant at the Brookings Institution in Washington, D.C. and an Associated Editor of Lawfare).
Excerpt:

Huge stakes are involved. Trade, energy, and geostrategic imperatives are driving both Chinese and Indian ambitions. Between the Indian and Pacific Oceans lies the main choke point of world commerce, the Malacca Strait. Today, more than half of the world’s container traffic and one-third of all maritime traffic crosses the Indian Ocean and passes through this point and into the South China Sea. To understand the scale, consider that roughly two-thirds of South Korea’s energy supplies, nearly 60 percent of Japan’s energy supplies, and 80 percent of China’s crude oil imports arrive over this maritime route. Meanwhile, 75 percent of India’s energy supplies cross the Indian Ocean.


China has long felt trapped by what national strategists have termed the “Malacca Dilemma”—that China’s access to the greater Indo-Pacific is limited to one main pass and that, to reach that pass, its ships have to travel over the South China Sea, which is a mess of overlapping territorial claims from countries in the region. And so over the last decade, China has sought to secure its access to the critical sea lanes, including by creating artificial islands with airfields in the South China Sea [6] and declaring an expansive and novel Exclusive Economic Zone—one that is far larger and includes far more prerogatives than permitted under The United Nations Convention on the Law of the Sea—over the area. From this perspective, Chinese Vice Admiral Yuan Yubai’s recent, and rather incendiary, declaration that the South China Sea “belongs to China” makes strategic sense: It is after all their path to the greater Indo-Pacific.


Along with creating routes to and around Malacca, China has provided soft loans to Bangladesh, Pakistan, Myanmar (also called Burma), and Sri Lanka for everything from highways, to power plants, to seaports. All of this has been part of China’s Maritime Silk Road strategy, which is meant to bind countries in the Bay of Bengal and the Indian Ocean closer to the Chinese economy as well as to build trade routes from China through their territory to the Indian Ocean, which would allow China to avoid the Malacca bottleneck. Yet this approach has been hurt by China’s more muscular activities in the South China Sea, which have scared the country’s smaller neighbors into closer alliances with India, Japan, and the United States.


As China has become more assertive, India has focused on its own rapidly growing need for access to critical sea lines and opportunities for trade and investment. In 2011, maritime trade constituted close to 41 percent of India’s overall GDP; the figure reached 45 percent in 2015. India now imports about three-fourths of its oil through the Indian Ocean. India fears that China, relying on its alliance with Pakistan, might encircle India on land and at sea. For Indian strategists, it doesn’t seem far-fetched that China would use its increased maritime capability to create a zone of naval exclusion that stretches from the South China Sea to the Persian Gulf.


To counter such encroachment, India, which was the largest recipient of global foreign aid until the early 1990s, has started to dole money out. The country now has more than $12 billion in open lines of credit and dozens of major development projects in foreign countries. Although Indian aid equals just a fraction of Chinese aid in the region, India hopes to use its funding, increased trade focus, military diplomacy, and cultural ties—its so-called Act East policy—to maintain and expand its leverage over the Indian Ocean Rim states to preclude a more permanent Chinese presence in those waters. 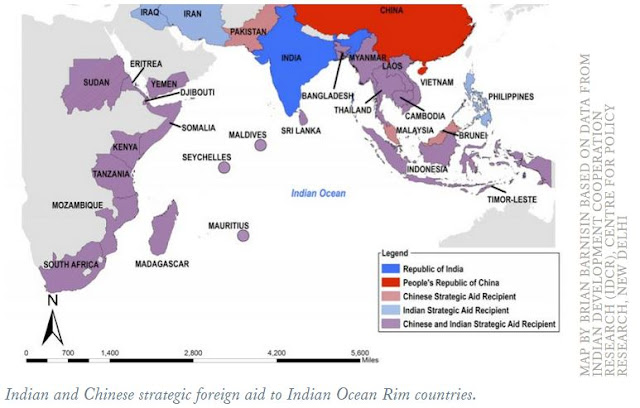 ﻿
My personal view is that Sri Lanka will favour China's influence as the resentment in Colombo towards New Delhi is palpable, the United States will tilt towards India for balance of power reasons in reaction to the Asian hegemon and the fact that it is angry over relentless Chinese cyber-attacks and bluster and India will lever a more assertive and muscular Japan since the Abe government  has renounced the pacifism that it embraced post World War II. Any Indian attempt to increase its profile be it through soft or hard power will be dependent upon who is in power in New Delhi. It is not a coincidence that the Indian state has hit beneath its weight for much of its existence thanks to those who have governed it at the national level.
Posted by Unknown at 12:14 PM