Three Years On
I do not want to be perceived as raining on the policymakers' parade --theirs is not an easy job-- but three years after Lehman Brothers went bankrupt observers saw an adrenaline induced pop in global markets as a result of the co-ordination between the European Central Bank and others to lend dollars to banks to tame the euro sovereign debt crisis.

This was nothing more than a palliative.

The ECB side of the story is that it "is ensuring that financially sound European banks will not face short-term funding problems even under stressed market conditions." (Joachim Nagel, member of the governing board of the Bundesbank)

It will not work: liquidity solutions (suitable to Italy only) do not solve the solvency problems relevant to the rest).
Here are the harsh realities: the inevitability of Greece's default is nigh; Italy's sovereign credit rating downgrade heightens the risk of contagion as  Eurozone based corporations increasingly look to places (other than European banks) to park their funds.

Why would this happen? As Bloomberg economist Joseph Brusuelas has shown in the chart below, bank debt --in light of the sovereign holding in Europe-- poses a greater systemic risk to Europe's largest economies and Germany's "bad banks" in particular will be hit hard when Greece defaults and German taxpayers will foot the bill. 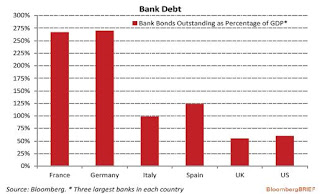 In the arcane world of bank capital management, sovereign credit downgrades at the macro level create a downward spiral that can lead to bank downgrade at the micro level when the banks are over leveraged and insufficiently capitalized: 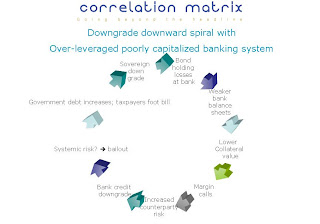 Think back to October 2008 as these vivid images coincidentally glossed the covers of The Economist and The Atlantic Monthly. 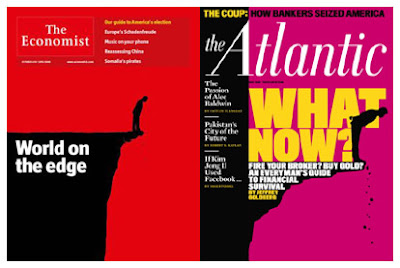 Bring back Political Economy
Have policy makers thought out of the box in response? Arguably not much because in terms of implementation --think of quantitative easing, EFSF-- we have seen stop gap measures reliant on the notion that equilibrium will be restored in time.
Amid the cacophony of noise that is the vacuous circus of business journalism, and as the summer of 2011 wound down, there have been some voices of reason espousing heterodox thought while conventional thinking has been an abject failure.

It is time to time to dust off a classic of political economy; consider the following seemingly heretical anti-establishment opinions:
What can the dead drunken german intellectual with carbuncles teach me?
Yes, the ideal of communism led to political disasters --this post does not advocate a renunciation of a market economy for a top down centrally planned utopia-- but as Mark Blaug noted that Marx wrote “no more than a dozen pages on the concept of social class, the theory of the state, and the materialist conception of history” while he wrote “literally 10,000 pages on economics pure and simple.” (Mark Blaug, Great Economists before Keynes (Highlander, N.J.: Humanities Press International, 1986), p. 156.)For the uninitiated who require a 101 recap, take a look at the video of Cranfieldrapid distillation of Marx's theory of Crisis as it provides an accessible framework with which to analyze the seeds of the greatest challenge the developed economies have faced since the The Great Depression.


We can all learn something about the past and prescriptions for the future.

Of course, such a distillation of Capital: A Critique of Political Economy without a nuanced view of properly understanding one of the most controversial and influential figures in history irritates the true believers. As York University's Leo Panitch frames it, beyond past crisis, the uninitiated should recongize how it is that capitalism's fundamental characteristics of exploitation and alienation, class inequality and social isolation are reproduced in commodity production and market competition even in periods of capitalist dynamism, and how this too plays a role in generating both financial speculation and future crises.


Creative destruction
The takeawy here is that a capitalist system is inherently unstable over time but --for its believers-- the dynamism of the system rests on the Schumpeterian notion where there is a renewing process of transformation that accompanies radical innovation as opposed to --the perspective of capitalism's detractors-- for example the David Harvey position: "Both Karl Marx and Joseph Schumpeter wrote at length on the 'creative-destructive' tendencies inherent in capitalism. While Marx clearly admired capitalism's creativity he [...] strongly emphasised its self-destructiveness. The Schumpeterians have all along gloried in capitalism's endless creativity while treating the destructiveness as mostly a matter of the normal costs of doing business".

The political economy of the current situation provides clarity in the fog of crisis: in hindsight, US President Barrack Obama should have concentrated on employment --as opposed to a watered down health care bill (known perjoratively as "Obamacare") that placated the rent seeking yet powerful insurance lobby and made no one (either on the right or left of the political spectrum) happy-- when the goodwill following eight disastrous years of George W. Bush's Presidency was palpable and --most importantly-- translatable into actionable policy when his term began in 2009. 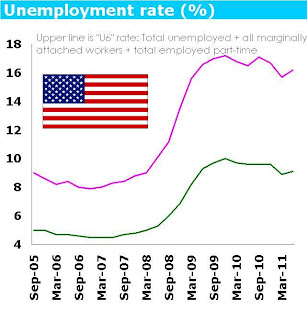 America's unemployment situation remains a disaster --best represented by the U6 rate shown above-- and will not be corrected with unimaginative supply side tinkering of payroll taxes that encourage (at the margin) corporations to hire more workers.  Supply side policies work during times of stability not depressions. The many Americans that have worked in unskilled sectors will not see those jobs come back thanks to technology and corporate globalization; it is something that an increase in education and job re-training cannot remedy.

The complexity of reality that requires daring thought has given way to the dogma of partisanship. The seemingly religious zeal advocating a fastrack to austerity in order to rekindle market confidence is based on the fallacy of composition equating federal government balance sheets being akin to those of households.

Establishment thinking is not the prescription
The establishment doctrine that has dominated academic thought over the last generation promotes the primacy of monetary measures over the blunt instrutment of fiscal intervention and an adherence to free market fundamentalism.  It is disappointing to see the take from the doyen of the New Classical School in a recent presentation where he implied that the government was doing too much and that "by imitating Eurpean policies on labor markets, welfare, and taxes U.S. has chosen a new, lower GDP trend."

The realities of day to day life illustrate that rational expectations and Ricardian equivalence have no merit for the ordinary person yet are part and parcel of what passes as wisdom within the halls of orthodox academic economics. As metioned, don't buy the false analogy of governments balancing budgets like households:
As we stare into the abyss it is increasingly likely in the new normal that the aftermath of The Great Recession will beget another Lost Decade for America and the Eurozone, with both:
The following charts starkly illustrate what the PIIGS in Europe are facing: 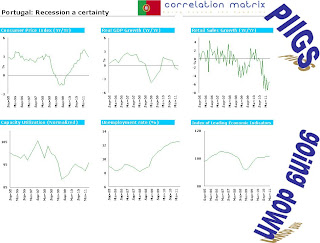 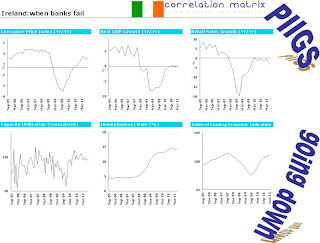 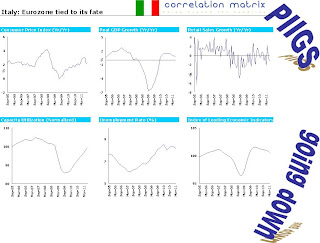 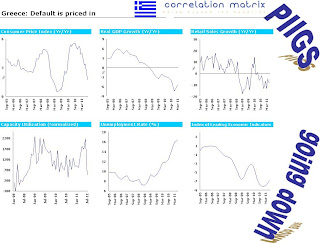 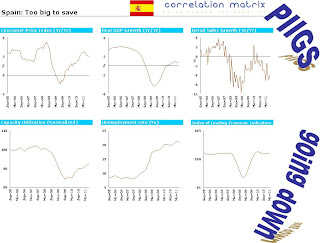 Alternatives to the status quo


The opinions expressed are solely those of the author and not of his employer.