Advances in economic thinking: It is about the money

Steve Keen explains his dynamic model of the economy in this video from the Sydney Morning Herald.

Keen, an Australian economics professor at the University of Western Sydney, has received funding from George Soros's INET.

His economic model mathematically incorporates the ideas of Hyman Minsky, the circuit theory of endogenous money and systems modeling. Keen contends that

I agree wholeheartedly; we can learn significantly more from this form of thinking --incorporating Minsky-- than from the high priests of the mainstream guild.
I will defer to another INET recipient, Leanne Ussher, on the need for new thinking in economics:


The problem with economics as a science has been the dominance of some very narrow and specific types of tools that come under the heading of classical mechanics (see Mirowski’s (1989) More Heat than Light). This equilibrium approach, coped from Newtonian physicists and in particular their Hamiltonian equations, have come to dominate economics in describing ‘dynamics.’ Such tools underpin the DSGE macro models, which also have some random shocks based on historical data thrown in for good measure. Such ‘dynamic stochastic processes’ that DSGE models used for prediction, can be described as arbitrary at best, and represent the desire of scientists to find solutions that fit their specific type of economic thinking – one of preconceived notions of equilibria and steady states.


However, these methods are just mathematical and statistical tools, they cannot be blamed in of themselves. It is the application of these very specific tools, to the exclusion of all other methods, and the restriction of a pluralistic approach, that has made economics such a narrow and doctrinaire science – dominated by equilibria and representative agents.

In economics, using methods from other sciences, be that biology, physics, mathematics, statistics, engineering, psychology, anthropology, history or what have you, is ultimately an art, though combined with validation methods through experiments and statistics can help to make it a science. Using methods from physics can be used to offer a NEW way of thinking about economics, which opposes the current neoclassical or rational expectations regime.


As long as a pluralistic approach within the economic field is embraced, then we have a science that will benefit from the competition of ideas. It is when pluralism is banned, when specific methods and tools are excluded, or when outcomes are forced to satisfy certain conditions, that science becomes a backward art dominated by fad and fashion rather than progress.

Our approach is along the lines of complexity in economics and it is definitely NEW within the schools of economics, though it has parallels with Economic Institutionalism and Evolutionary Economics which emphasize institutional structure, interaction and demographics rather than with DSGE equilibrium macro models which are based on the psychology of a representative agent. A description of the complexity or emergent order approach within the field of economics can be garnered from an INET conference session earlier this year:

Skidelsky and most economists are not opposed to the use of mathematics or physics in economics. It is rather the manner in which it is used to pursue a narrow line of thought and its dominance in the field that has led to the exclusion of a pluralistic approach.


While stylized rather than mathematically rigorous, I argued in April that with the western economic system relying heavily on consumption to maintain growth and no real growth in wages for those outside of the top quartile of wage earners (citing the United States as a proxy for the advanced economies) it was actually the access to credit that was critical for the middle class to sustain consumption.

We are now firmly in the midst of paying down balance sheets and governments are under political pressure to move toward austerity. Businesses are not filling the void and the global dynamics of high savings in emerging economies due to consumers having no safety net entails that these potential markets are not the immediate solution to the West out of its malaise. All of this portends long term slow growth. The United States will not have the catalyst of another World War --at least, let us hope not for that would be the war to end all wars-- to bring it out of depression. The military industrial complex that has comprised the cylinders of its economic engine (below)  since World War 2 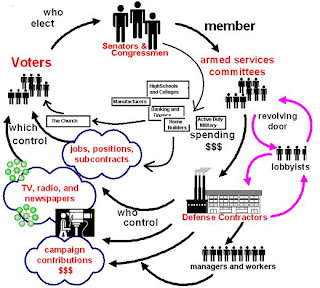 should give way to a different paradigm but such structural adjustments take years.
Posted by Unknown at 2:09 PM