It is only of academic interest to those at the NBER as to whether the U.S. will officially have a recession in the coming quarters. A rule of thumb for job growth coming out of a deep recession --as that experienced after 2008-- is that in aggregate an economy the size of the United states should be 'creating' approximately 250-350 thousand jobs a month (my assertion is based on BLS not ADP figures). That range is represented by the grey band in the bottom right chart. The fact that has not been happening explains the unemployment rate on the left and the widening gap between U6 (reflecting real unemployment) and the official unemployment rate. Notwithstanding Paul Krugman's protestations, there is a structural problem at work here. Routine work that is low skill and routine work that is high skilled has been displaced by a combination of technology and corporate globalization. Those jobs will not come back. Absent a credit induced increase in consumption --very unlikely as households pay down debt-- and businesses hiring --also unlikely given the dearth in demand as Say's Law is not at play here after a real estate crash-- and visionary government works --again unlikely as the United States begins on the long road towards austerity-- and banks lending --unlikely given their poor capitalization, over leverage and future Basel III regulations-- we are on the cusp of low sub-trend growth (not because of what the New Classical economists stated but) because of the real role of credit in our economy and what the lens of history will call the Great Depression of the Second Millennium. 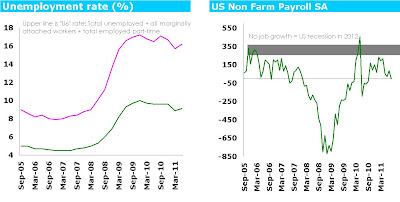