Have Canadian Households Embraced Riskier Activity by Choice or Necessity?

On June 13 the Bank of Canada ("BOC") released its bi-annual Financial System Review ("FSR") which can be downloaded from this site. In contrast to the central bank's quarterly Monetary Policy Report which always concludes with "Risks to the Outlook" that are, by bank policy, "roughly balanced over the projection  horizon" the FSR explicitly states downside risks. In the most recent release those risks were articulated as follows:

Nevertheless, the Canadian financial system continues to be vulnerable to a number of key risks. These risks are similar to those highlighted in the December FSR and emanate primarily from the external environment: sovereign and banking stresses in the euro area; deficient global demand; elevated household indebtedness and imbalances in some segments of the Canadian housing market; and increased risk taking arising from a prolonged period of low interest rates. [emphasis added] 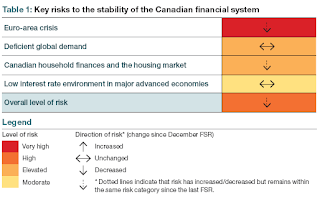 In addition to the Risk Assessment section the FSR contains three reports: The Basel III Liquidity Standards: An Update; The Market for Collateral: The Potential Impact of Financial Regulation; Monitoring and Assessing Risks in Canada's Shadow Banking Sector. The latter is summarized by Maclean's columnist Erica Alini in her piece, "The shadow banking sector has been feasting on government-insured mortgages"
These are all worth a read but predictably the media singled out the BOC's concern about household debt. For example here (Quinn June 14, 2013) states:

Household debt reached a record 165 percent of disposable income in the fourth quarter, and Finance Minister Jim Flaherty tightened mortgage rules last year to avoid what he called signs of overheated condominium markets in Toronto and Vancouver. Statistics Canada will publish first-quarter debt figures later this month. The central bank forecast today that the debt to disposable income ratio will stabilize this year. Other signs of “constructive evolution” of household imbalances include slowing housing starts and resales since mid-2012, according to the report.

Here is the now infamous chart of how Canadian household debt has marched upwards since 1990: 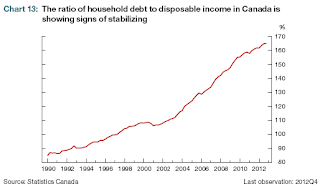 Looking at a shorter time span (2005-2013YTD) the BOC has observed levelling off of house prices: 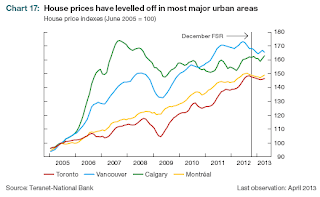 Yet that house price to disposable income ratio remains significantly higher than the average level (1981-present) in Canada: 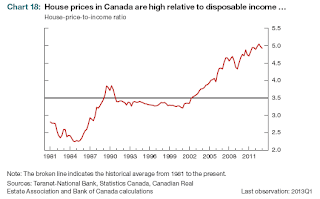 The Economist newspaper uses a different measure (Prices against average income) but shows a similar story comparing Canada vs. United States during the period 2002-2013YTD 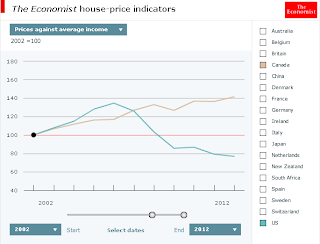 Extending this time series out to 20 years here are Prices against average income (Canada vs. United States) 1992-2013YTD 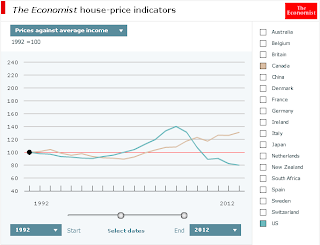 Now going back another 10 years there is a generation of Prices against average income (Canada vs. United States) 1982-2013YTD 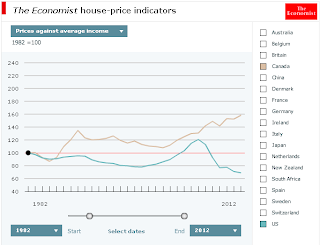 The immediate takeaway from this is that in aggregate the cost of home ownership for Canadians has been higher for a generation when compared to their neighbours south of the 49th parallel. When one considers that the cost of capital is also higher in Canada, mortgage interest deductability is absent save for the precious few willing to financially engineer it by methods like the Smith Manoeuvre and its derivatives, and long term mortgage rate terms (i.e. above 5 years) are a rarity for Canadian consumers, it should be pause for thought for those looking at such a measure (be it 'prices/average income' or 'household debt/disposable income') as a meaningful comparison with the American experience to be a predictor of a possible inflection point and future downturn.
The Canadian financial system weathered the global financial crisis better than most other systems due to the oversight of its financial regulators (OSFI), the relatively conservative nature of its banking oligopoly, and a critical behavioural aspect: the steadfast resolution of Canadian consumers to meet and not renege on their debt obligations.

Is the latter a result of Canadian bankers better adhering to the 4 Cs of credit --character, capacity, collateral and capital-- before sending off mortgage and loan applications for approval? That is possible but unlikely. The front line of any financial institution, from the office of a local bank branch to the sales desk in capital markets (broker/dealer) is a main point of entry for risk into a diversified money center bank's balance sheet. There   are enormous pressures on individuals to sell as many products (to the end consumer) as possible and do so within the parameters of a standardized risk-reward trade-off that would not require extra oversight from risk management. Essentially, the more that the process can work like a smooth functioning assembly line the better for any wrench in the cog would slow down the revenue stream. To wit, the bigger the mortgage that can be approved the better. Such opportunities have grown since the early 1980s: the importance of finance and concomitant financialization of the economy has seen steadily increasing debt loads in the household sector whose wage growth has been moribund. As (Palley 2007) states:

Typically, the concept of home ownership has often been framed in terms of being an Anglo-Saxon phenomenon --with North America and Britain at one end of the spectrum and Europe at the other. Yet when we look at core European countries we observe that Canadian 'affordability' is greater than that of either Belgium or The Netherlands which is experiencing the start of a serious downturn at the moment.
Prices against average income (Belgium vs. Canada vs. Netherlands vs. United States) 1982-2013YTD 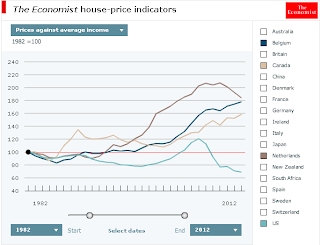 There are always multiple dynamics at play and each nation's case needs to be considered on its own merit. Coming back to Canada, my colleague David Wishart (visit his blog, The Dismal Science here) made the astute observation of household debt accelerating in Canada after 2003 after increasing steadily in lock step with nominal GDP from 1981-2003. His words below:

Things started going wrong in 2003. What changed? CMHC removed the price ceiling on the mortgage amount it would insure. The Blue line represents how much debt the total amount of employed labour is carrying, which is a better indicator than household debt per capita because these are the actual people servicing the debt. As of 2011 it was at $130,000, so for a couple that's $260,000 which is 3.39 times after tax household income. In 2003 this ratio stood at 2.33 times. That's an increase of 5% yoy, which is greater than GDP growth, suggesting it's not sustainable, which the current slowdown in housing is making evident. [emphasis added]

Something unwritten in the media is the concept of debt being made available to consumers. It is usually framed solely as lower rates after the great financial crisis encouraging riskier activity: this is what the Bank of Canada writes, and it is what the much of the media parrots but it isn't necessarily accurate.

Going back across the pond to the Emerald Isle we can see what happens when House Prices outpace Wage Growth: 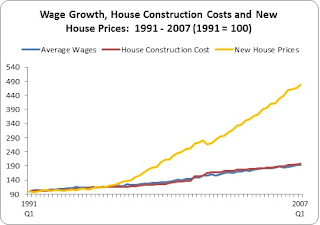 Michael Taft, on his blog, Unite's Notes On The Front, articulates it as such:

First, household debt did not become a crisis because people ‘went nuts’ buying houses without any regard to anything. It was a systemic crisis – deeply rooted in the base of the political economy. Faced with this systemic phenomenon people had two choices when purchasing shelter. They could either take on a lot of debt buying a house, or they could travel far away from work to buy a house they could afford (adding transport costs and losing home-time for their efforts). People’s behaviour did not cause the property boom, it was merely a response. They did not and could not control the price of housing – that was driven by a runaway market manipulated by a golden circle of myriad interests.
And there were no substitution goods. Renting in the private sector was not an option for most household types as this sector was woefully under-developed.

Second, the household debt crisis did not arise through the normal functioning of the ‘market’. As we saw above, house price increases were consistent with average wages and construction costs in the period between 1990 and 1996. Builders weren’t losing money during this period. They weren’t building and selling houses for philanthropic reasons. They were making profits and employing workers. But the speculative gap arose because the normal functioning of the market was perverted. How do you think financial institutions make a living? They earned profits by loading households with debt. A number of interests made a lot of money with the complicity of Government policy (tax reliefs, tax cuts, lax planning regulations, boom-incentivising development fees for local authorities, etc.) and irresponsible financial regulation.

The household debt crisis is a political and social issue. It is not – and let’s be absolutely clear – it is not an issue of individual profligacy or household irresponsibility. That people get into financial trouble through imprudent conduct happens all the time – but to suggest that that the property crisis was simply the aggregation of individual financial recklessness is merely a self-serving attempt to shift blame. [emphasis added]

This fits well into the Canadian context -especially when one considers that rate at which residential real estate costs have skyrocketed past the rise in incomes. As has been noted before in this blog, deleveraging in Canada is inevitable. The yet to be determined end game is whether it will come in a smooth or turbulent fashion. The bet here is for the former as households will be forced to hold back on consumption in order to service an increasingly large stock of debt.