Today's inflation release from Statistics Canada created a flurry of activity in the F/X markets with the Canadian dollar (the "loonie") advancing the most in relation to the US greenback in two months and spurring speculation of the Bank of Canada ("BOC") moving forward with expected rate hikes from July 17 to May 31. This is unlikely.

The arcane world of central banking and monetary economics is replete with references to output gaps, terms of trade, nominal anchors, projection horizons, and base case scenarios. It is generally agreed that inflation is a real and tangible phenomenon in countries not having to contend with massive devaluations in real property in the aftermath of the Great Recession -- I am referring specifically to OECD nations here, such as Spain whose crash dwarfed that of the United States -- and the resulting commodity demand stemming from development in China (primarily) and other nations.

Consider that some central banks -- namely the European Central Bank -- are taking preemptive action to stave off nascent inflationary embers, whilst others -- think of those in the emerging market and BRIC economies such as the Reserve Bank of India -- have been decidedly behind the curve and risk exerting further hardship on their impoverished underclass.

This should not detract from the assertion that the BOC will hold off until July.

Consider two points and decide which, if any, are feasible.

The nominal anchor is within the control range: 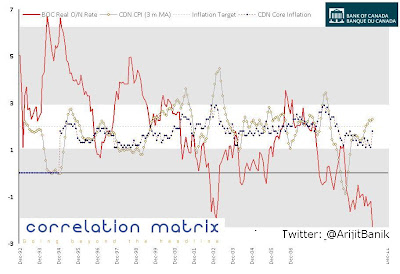 The chart above tracks the "real" BOC overnight rate (based on the Fischer equation) along with core inflation (ostensibly the BOC's nominal anchor) and a three-month moving average of the CPI to strip out noise from monthly releases. It shows that -- in keeping with the BOC's assertion -- monetary policy remains very accommodate.

In addition, there is the Taylor rule, which Societe Generale senior economist Rudy Narvas has
augmented based on the strength of the loonie to predict that a July hike remains on the cards.

Furthermore, readers should consider that central bankers are generally a conservative lot; it is highly unlikely that a rate hike catalyst will be the higher than expected monthly inflation figure.

Sings of inflation would have to be persistent and pervasive and the current fluid geopolitical situation in Northern Africa combined with the uncertainty surrounding Eurozone peripheral sovereign debt and health of the European banking sector (be it in terms of capitalization or quality based on a rules or macro prudential framework) leaves the notion of an earlier than expected hike as dubious.

Having said this, there is absolutely no doubt that the erudite scholars of the Monetary Policy Council at Canada's preeminent economic think tank will be urging for a 25bp hike -- as they have been doing since the beginning of 2011.
Posted by Unknown at 5:58 PM