A previous post written on the heels of the European Central Bank's 25 basis point rate hike in the target refinancing rate posed the question pertaining to the ECB's conundrum: where would it go based on the sub optimal nature of its currency area?

The argument forwarded, in a somewhat glib and matter of fact manner, rested on the notion that policy would have to be shaped by the core, specifically Germany, and the periphery -- known derisively as the PIGS -- be damned.

For one, the dealer rates desks have recognized that rate hikes that were formerly baked into the cards, are no longer a sure bet. After the hike and amid the revelations of further challenges surrounding the sovereign debt situations in Portugal, Greece, and speculation concerning Spain, market expectations of future hikes have plummeted. There is now the tug of war between an strong core and a weak and worsening periphery as well as a circumspect banking system that is inappropriately capitalized to shape market expectations. 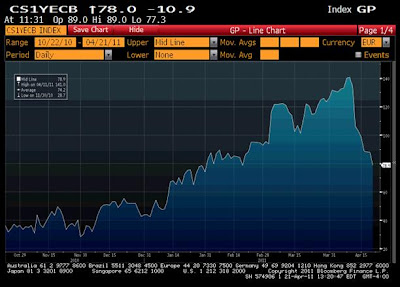 When we say Germany is the "economic engine" of Europe, what do we mean?

Despite the growth in Eurozone membership, Germany still accounts for almost 30% of nominal GDP of the Eurozone. 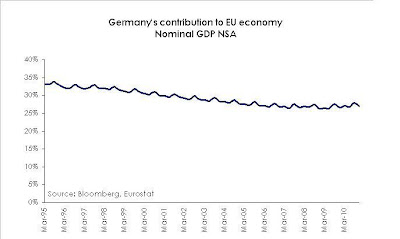 How Germany goes, so goes the Eurozone?
The Eurozone's three charts: CPI, Real GDP growth, and Capacity Utilization, mirror Germany's in trajectory. Yet there is a disconnect when it comes to unemployment... 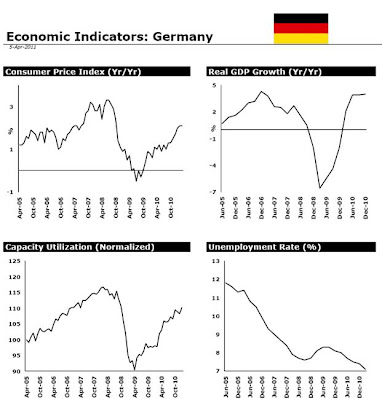 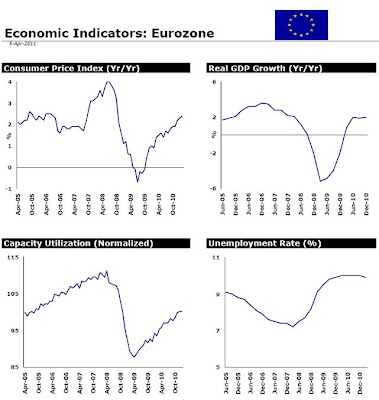 Why is Germany's unemployment situation better than the rest of Europe?
German labour did the heavy lifting in terms of sacrifices during the 1990s as the structural adjustment of abandoning the deutschmark took its toll on the German economy, and particularly the workforce. Upon reflection, the higher productivity of the German workforce, the time sharing activity during the slowdown, and the global demand for a range of goods from the industrial sector -- where Germans SMEs specialize and dominate -- to consumer durables -- where the global market's well heeled and the nouveau riche consumers demand the prestigious brands synonymous with quality and reliability -- have been amongst the factors for the low German unemployment rate.
What the chart below illustrates is the fact that German unit labour costs have risen far more slowly during the past decade than those of the peripheral nations --Portugal, Ireland, Italy, Spain. 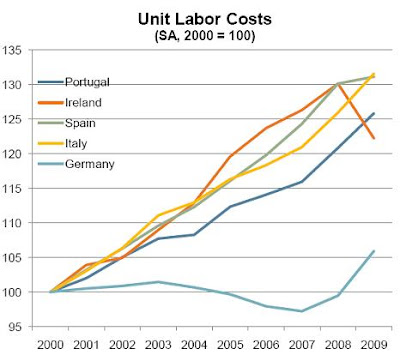 The sub-optimal nature of ECB monetary policy (on the one hand) and the fiscal irresponsibility of member states who were ostensibly bound by a toothless and meaningless growth and stability pact is laid bare for all to witness in the aftermath of the Great Recession: consider the real estate asset bubble and its aftermath. 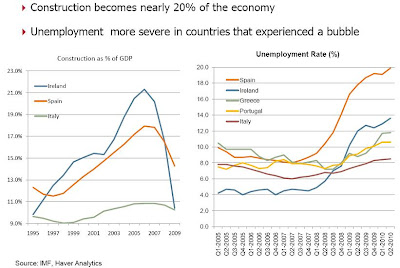 Spain's real estate bubble in particular has dwarfed that of the United States but Ireland and Greece went on similar runs with central bank policy rates that were far too low. 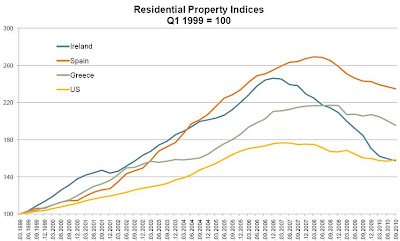 What does the future hold for the peripheral Eurozone economies that had the great asset busts?
Consider Japan (see chart of Nominal GDP below); the "lost decades" scenario is far more likely to play out in Spain and Ireland but with a twist as every country has a different story: expect a never ending dose of disinflation bordering on deflation peppered with supply commodity supply shocks induced by the demand in the developing world. Portugal's problems -- low productivity and high factor costs combined with an unsustainable fiscal situation -- also leave it in a potentially deflationary lurch. 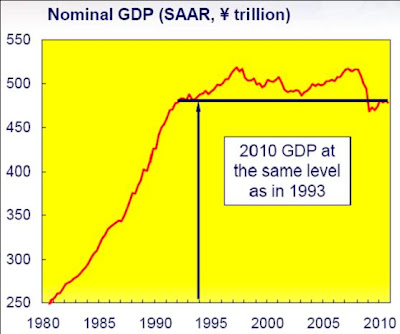 With the recent record nominal highs in silver and gold, this view may appear heretical but remember that in the absence of a flexible exchange rate -- something that Portuguese and Italian governments past have relied on to remain competitiveness through implicit devaluation -- the PIGS, namely Portugal, Ireland, Greece and Spain will have to adjust by lowering costs.
The supply shocks of ever increasing commodity and fuel costs will give the impression of inflation but within the peripheral nations the working and middle classes will simply not have the power to negotiate rises in wages or salaries given the far greater than long term average unemployment rate combined with the necessity of policy tailored to a booming German engine. There will be no wage push inflation; there will be no second round effects -- inflation will be transitory, disinflation will become embedded, while there will be price stability for the core.
Could all of this have been avoided at the policy level?

While there is no use lamenting what might have been, there was much hope thrust into the idea of union rather than the practicality of it. Here is prescient analysis from Hans Visser's excellent book "A Guide to International Monetary Economics: Exchange Rate Theories and Policies" whose third edition came out in 2004:

It seems safe to conclude that a monetary union is likely to bring more benefits the more intensive is intra-union trade, and that the loss of the exchange rate as a policy instrument is less harmful, if

In the EU, of the 15 intra-union trade is quite high. The industrial structure is diversified and quite similar in most of the member states, with Ireland, Portugal and perhaps even more so Greece the exceptions.

Swap market expectations chart from Bloomberg
Economic indicators for Germany and Eurozone and German GDP as a percentage of Eurozone created with Excel from Bloomberg and Eurostat data
Charts of unit labour costs and asset bubbles from Peter Hall (VP & Chief Economist, EDC) presentation: Euro Crisis: Is The Global Economy At Risk?
Chart of Japanese GDP from Michael Eyestone (Counsellor, Economic and Financial at the Canadian Embassy, Tokyo) presentation: Changing Japan in a changing Asia; Developments and Prospects
Posted by Unknown at 4:49 PM