The Limits to Growth: Access to credit and money illusion

GDP figure for the United States came in with an underwhelming thud last week just as inflation has been creeping up. Research by the Dallas FED has maintained that core inflation remains within control while FED Chairman Ben Bernanke has argued that headline inflation is transitory. The recent down tick in unemployment (Exhibit 1)--which is welcome news given the FED's dual mandate of price stability and full employment-- is just as likely to be a result of decreasing labour market participation as it is from actual growth in employment when viewed in hindsight.

North of the 49th parallel, and arguably in subtle contrast to the FED's position, the Bank of Canada, in its April 2011 Monetary Policy Report, has stated that robust demand from emerging market economies combined with the commodity supply shocks of rocketing fuel and food prices are creating global inflationary pressures that will have a strong direct channel into core CPI. The nuance in the BOC's argument is in the reaction of consumers: it is understood that commodity prices act as a tax on consumer behaviour -- take gasoline as an example -- but consumer behaviour will only change once prices are perceived to be persistent wherein a substitution effect takes place (e.g. purchasing a hybrid vehicle as opposed to a gas guzzling SUV). But substitution effects are only likely with appropriate expenditures -- most consumers do not have the requisite liquidity to make durable goods expenditures with turns in the business cycle -- and such expenditures are dependent on access to credit. David Powell, an economist at Bloomberg, came out with some figures showing that (before tax) prices of gasoline (in USD) at $3.73 for the year would entail $667 more on fuel expeditures for the average American than in 2010. When that figure is increased to $4.00/gallon it entails $885 more spent on fuel. Do American's have the access to credit to make a change in light of such a persistent scenario? 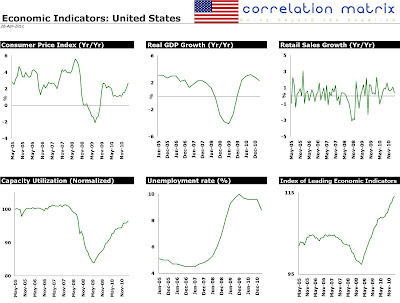 So what does this portend for economic growth?

Leading indicators (Exhibit 2 & 3) and financial conditions (Exhibit 3) are improving and make a case for better times ahead but the challenge will be complex and such indicators are only of use when they are persistent and pervasive. 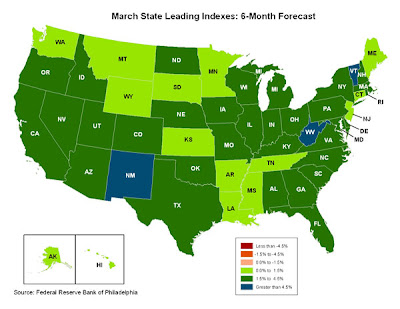 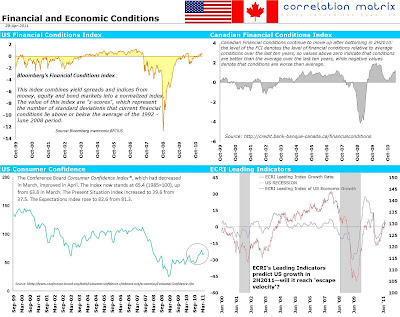 To further complicate the situation, consider that stagflation in the United States is now on the radar as a possibility: research by the San Francisco FED (Exhibit 4) has argued that the NAIRU is now probably appreciably higher than before.

Of course, the criticism of such analysis rests on the notion that there even should be a "natural rate" of unemployment but then the point of this post isn't to attack the edifice of neoclassical economic analysis. 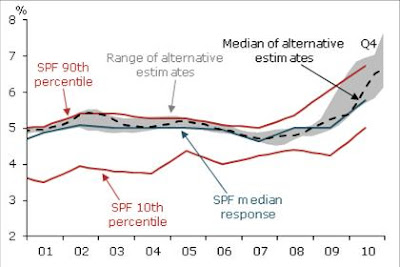 The case has been made in previous postings that (in my opinion) we should expect a return to old fashioned business cycles and hard landings with the absorption of labour in the globalized economy. For two decades, this labour from the emerging markets was instrumental in the ascendancy of Wall Mart to becoming the world's largest retailer; instrumental in keeping a lid on inflation; and a cornerstone to the myth that a subscription to a rules based approach to monetary policy was all important as exemplified by what is now termed the Great Moderation.
History will show this to be false. Short of the discovery of a breakthrough technology that will make the reliance on oil obsolete, the demand for oil and its derivatives will continue to rise as will the supply shocks to global economies.

Is Sustainable Domestic Growth Possible?
Yes, if the fuel for the Ponzi economy in the West, namely access to credit, is maintained. If not, then we should expect sub trend growth in the coming decades.
The reason?
The vast majority of the population cannot afford the lifestyles they aspire to; this is particularly evident in the aftermath of the Great Recession.
Looking at this from the vantage point of two extremes in the political spectrum: Raghuram Rajan, a former Chief Economist for the IMF and now a faculty member at University of Chicago's Booth School (see Exhibit 6); and Marxist scholar Rick Wolff (see Exhibit 7) we see agreement on one observation: inequality. 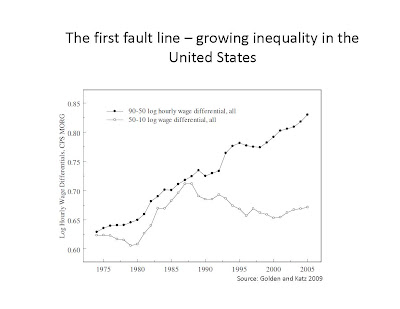 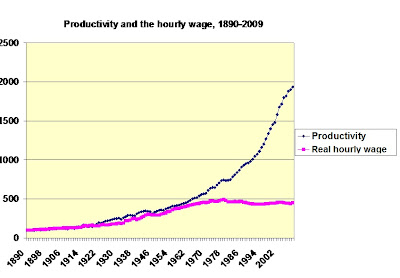 In Wolff's Marxian analysis, the gains in productivity have not accrued to the working class but rather to those at the top of the corporate structure --think of classical economists Adam Smith and David Ricardo and their proposition of labour theory of value-- hence the resulting inequality within the current American milieu.
For Rajan, who is fundamentally a conservative economist if not necessarily a pure adherent to the freshwater school, it was the excesses in sub prime lending that was the final unsustainable band-aid that failed to deal with the reality of rising income inequality. He has forwarded the proposition that those in the middle and the bottom income groups continue to lose ground and it has been borrowing by those less successful groups that has permitted them to spend as if they were better off than they really were (hence the money illusion argument of actual rather than real wealth).
Short of a concerted and reasoned effort to deal with the root causes of inequality -- not an easy task by any means for any policy maker -- the only way for the American economy to grow at trend levels would be for the credit spigot to reopen.
Given the current credit situation (Chart 9) and the future regulatory landscape that puts a greater premium upon the availability of liquidity and capital amongst financial institutions, the chances of this are slim. Banks recognize that growth will be from ultra high and high net worth clients -- whether they be in domestic or foreign markets -- not from bread and butter lending to the middle and working classes.
The following chart (Exhibit 8) shows the time series over three decades (1975-2005) and argues (based on a Minneapolis FED article) that worker's hourly earnings rose by 16% over that period; by any estimate this is a modest increase and would be lower in light of the downward pressure on wages in the last few years. 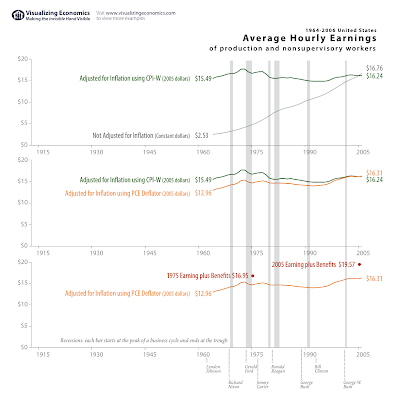 The bottom left chart illustrates to what level consumer credit must return to if Americans (in aggregate) are to have the purchasing power of the past.

Exhibit 9. Access to Credit is critical for the middle class to sustain consumption 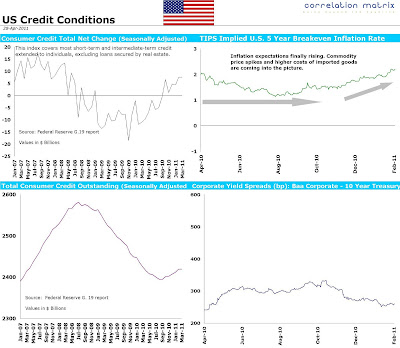 The thrust of the argument in this post is that there is a limit to the growth profile for the American economy and that is contingent on a return to the easy credit of the past. Short of that, the rising inequality means that there will be an increasing bi-furcation within society. The stability of business cycles and the soft landings prior to the Great Recession where the result of a global manufacturing labour force -- primarily in China -- and to a much lesser extent an outsourced service labour force -- primarily in India -- that kept down the demand for labour in the West and any concomitant upward pressure in wages. Whatever fruits of productivity funneled to those at the top of the corporate hierarchy hence the increasing inequality observed since the mid-1970s (when trade unions still had power) and the beginning of neo-liberal revolution that broke the back of inflation by breaking the

There is no short term panacea for America to return to the growth profile of the past: granted, its entrepreneurial sector remains amongst the world's most vibrant and it will continue to be a magnet for the world's immigrants but the overhang of military over-reach, combined with the sclerotic manner in which politics in Washington is conducted -- solely for the lobbyists on K-street rather than the people on Main street -- means that observers, will continue to be spectacle to questions of Barack Obama's birth rather than a fundamental tackling of the serious issues that the country faces.