Betting against the FOMC

These two slides are from a deck by Vincent Reinhart and Harold Ford Jr. for a Morgan Stanley Conference call. 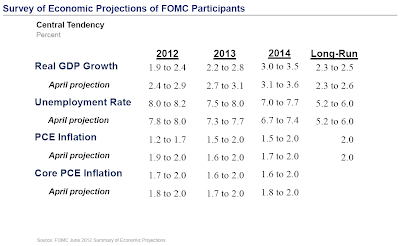 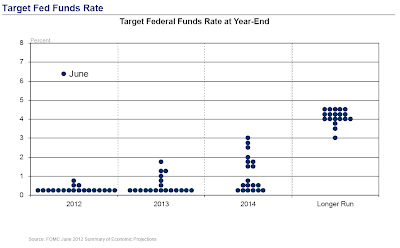 Referring to the lower chart, if there was a trade then I would take the other side of the "Target Fed Funds Rate" view for the "Longer Run" bucket; it appears (to me)  higher than the U.S. economy could sustain without significant de-leveraging of the private sector and renewed access to cheap credit to smooth consumption for the bottom quartiles of the wage pyramid. Clearly the FOMC believes --explicitly or implicitly-- in the rate normalization hypothesis rather the any manifestation of Irving Fisher's Theory of Great Depressions. Bernanke, a tried and true disciple of the Friedman and Schwartz narrative about the Great Contraction ﻿has enacted the "save the banks, save the world" form of monetary engagement but the coming 18 months will give investors, and more importantly working people, a clearer insight to the depths of the malaise. Of all the policy tools available, a form of quantitative easing for the public will not be an option. The global imbalances that have shown the circumspect nature of policy prescriptions from creditor and debtor nations alike will remain; not every nation can trade its way out of the quagmire and not every country can have a current account surplus. In time that longer run view of the target Fed Funds Rate will come down as reality hits the fantasy of Panglossian expectations.
Posted by Unknown at 5:00 PM