Wealth does not trickle down...

Hat tip to David Ruccio at the RWER blog for making this graphic from The Guardian available.


Capitalism's enigma remains its undeniable ability to morph from one form to another.  The Hobbesian social contract of Western democracies in the period following World War II saw its "Golden Age" where labour power acted as a check to the power of corporations and the notion of a living wage was not alien. But as labour flexed its power and productivity wilted away, the commodity induced inflation courtesy of the OPEC cartel provided an in and paved the way for a newer global order of orthodoxy in the 1970s. America unwound from the gold standard --undoing Bretton Woods in the process-- and the neo-liberal policies were introduced that unleashed the power of capital globally.

Capital has effectively usurped labour over the past 40 years and the capitalist dilemma has been that in its so-called free "laissez faire" form it leads to an accumulation in fewer hands with the unintended consequence being a steady erosion of the social fabric within the state.

The result is that "trickle down" economics does not exist. The rich do not create jobs; entrepreneurs endogenous to a capitalist system with access to credit ultimately do. Stability is provided by governments, industries, labour --all of whom are stakeholders: institutions matter; they always have and always will.

The value added from business ventures --or 'surplus'-- when not dispersed in an equitable fashion amongst stakeholders does not lead the acquisitors of the surplus to enact in a manner befitting noblesse oblige. Instead, carefully crafted propaganda has left the general populace to worship at the alter of celebrity and wealth; this does not make people better off --it leaves them deluded.

Attend any investment conference and it is readily apparent that there is no lack of capital in the world but when it is an asset in the hands of the relative few it is unavoidably funneled into unproductive endeavours --think of the never ending asset bubbles we are witness to-- be it investment in luxury real estate, commodities, or the latest derivative concoction within the shadow banking sector.

When we consider the identity that within a closed global system assets and debts net out to zero, we can recognize that this capital socked away in tax havens and other exotic vehicles is mirrored by a mass of private sector household debt that must be paid down. It has been fashionable for everyone's favourite rag, The Economist, to lament the growth of Leviathan --putatively 'big' government-- in the years following the financial crisis of 2008. 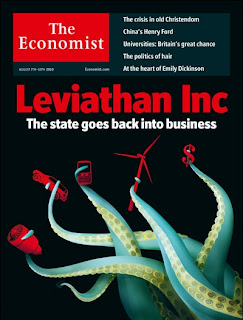 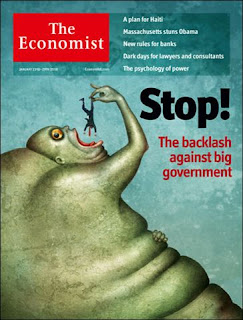 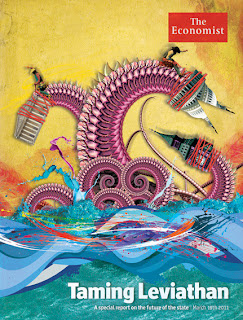 Unless three inter-related things happen: (i) the credit spigot is turned on for productive purposes; (ii) the middle and lower classes share in the spoils of the surplus and (iii) the global economic order is re-worked under a new architecture whereby bad assets are written down, there is only one game in town --that is Leviathan, and it must enact pro-growth policies lest the West and the Rest suffer from Lost Decades.
Posted by Unknown at 5:09 PM