China won't save the world 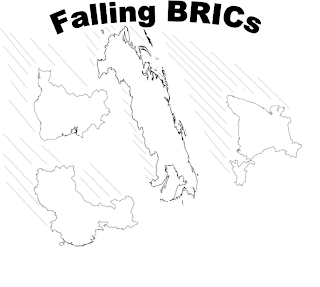 A previous post, "Is China misunderstood?" showed the opposing views of the China growth story and took the position that the sustainability of China, chief amongst the BRICS, growing at a breakneck pace should be greeted with caution at best and considered realistically sustainable only in the short term (i.e. up to 5 years). This post will attempt to flesh out a few of the reasons for the skepticism. There is no need to repeat conventional wisdom as others can state it more convincingly but here it is in essence: China is too reliant on fixed investment – be it property, manufacturing or infrastructure – and when increasing investment becomes unrealistic then the Chinese economy is vulnerable to a substantial slowing.
Moreover, as Capital Economics has shown (see chart) I/Y (Investment as a proportion of GDP) has been rising in China; this is against the edicts of the Politburo's previous 5 year plan that called for a re-balancing of the macro economy towards greater reliance on Consumption --entailing a stronger household sector-- and away from Investment and Net Exports as drivers of GDP. 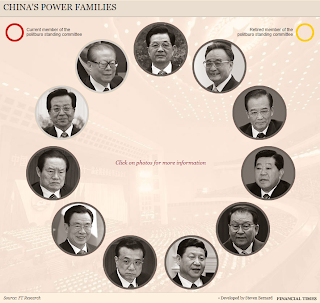 The Chinese elite --be they current or past members of the Communist Party's politburo-- have been masterful in charting the growth trajectory of the state's crony capitalist structure and finely tuning its mercantilist policies; the result (in conjunction with helpful neoliberal corporate globalization policies that aid and abet the inflow of financial capital and outflow of jobs) has seen remarkable strides in material wealth, productive capacity, human capital and transfer of technology from Western to Chinese companies.


The usual reaction of criticism of China has been for uber-nationalist cyberspace lurkers to post defensive retorts on establishment sites (e.g. Financial Times, The Economist, New York Times, Foreign Policy) and the occasional less than radical blog usually with  incisive claims about China's mandarins focusing on the long-term and the inability of Western minds to comprehend the Chinese game theoretic approach which cites Go as the appropriate strategic war-gaming metaphor rather than the West's focus on Chess (which curiously has its origins in the East anyway).


This is unfortunate: no reasonable individual questions either the ability, intent or talent of the Chinese people doing the work within the mainland or the diaspora internationally; it is the sustainability of the growth model that is rightly being called to question and this model will be under greater pressure as the imbalances between the consumptive West and the savings driven Rest continue and the household debt burdened are tackled through a steady dose of de-leveraging.

None of the concerns of shrieking Cassandras are new: in 2010 with China's Q2 GDP racing away at 10.3% Ken Rogoff warned of an impending correction in China's property market which would funnel through to its financial sector; that correction didn't happen.

At that time China's banking regulator ordered lenders to conduct stress tests where housing prices would fall up to 60%. But what point is a stress test in a country where economic policy is determined by political power? When is a stress test useful when non performing bank loans can be bailed out by the central government?

The main driver for China --as has been the case elsewhere-- has been credit: if credit is taken away then the progress from globalization is taken away as would the demand within China.

The Chinese - American relationship ("Chimerica" as framed by Niall Ferguson and Moritz Schularick) is the world's largest  vendor financing contract and is still viable for the short-term --or as long as the current account surplus remains. Fortunately for Chinese authorities, they are sitting on massive capital gains as export earnings invested in U.S. treasuries have seen rates plummet since 2008. 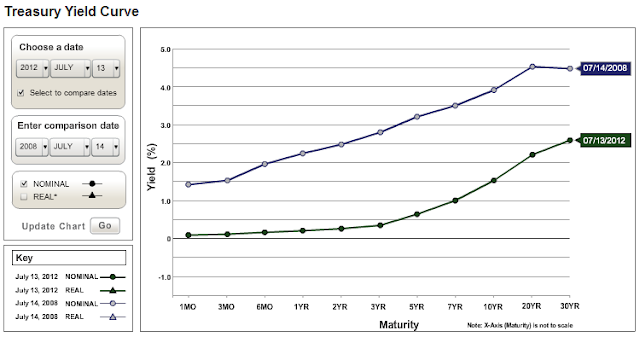 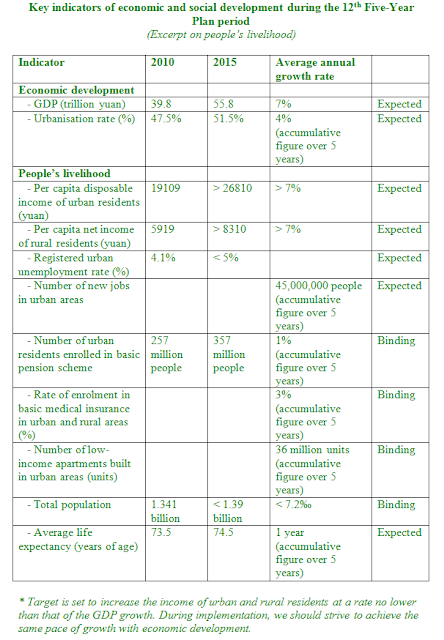 In a recent Project Syndicate piece "Why China Can't Adjust" Minxin Pei argued that China's challenge is in the medium term rather than immediately. The growth model has depended upon the repression of the household sector in favour of state owned enterprises so while the financial sector is replete with npls the local governments, railway system and real estate developers are most vulnerable to serious downturns.

Is a downturn coming? Notwithstanding Li Keqiang's advice to US policymakers to follow electricity usage, rail cargo volume and bank lending as economic indicators rather then GDP, here are three leading indicator charts that presage a slowing growth outlook: 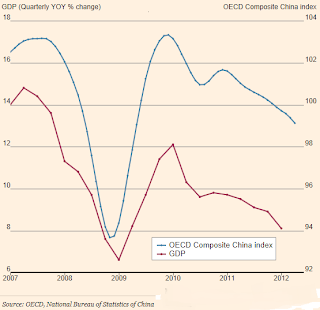 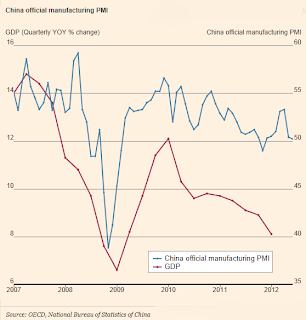 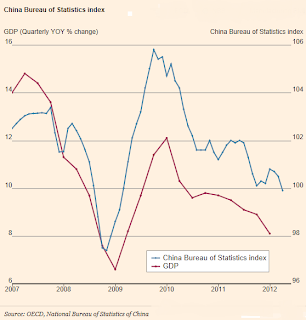 For the immediate term this should not be disastrous.

Chinese state owned enterprises exist and will be supported via fiscal stimulus and will continue to play a large role for sometime for a number of reasons: (i) they are strategic to the Politburo; (ii) they remain a self fulfilling patronage machine for the princelings, children and relatives of the CPC; and (iii) a healthy mistrust in Western style capitalists persists.

The quid pro quo from private entrepreneurs is political allegiance and no power allotted to labour unions as that would be counter to the enterprises absolute advantage in low wage labour. The price of such a Faustian pact is unclear but Pei estimates 1.1 trillion dollars paid to officials at various levels for bribes which ramps up exponentially at the age of 59 --the age where officials attempt to cash in.

Ultimately, how will China successfully rebalance from investment and net exports to consumption when the Soviet Union, Brazil and Japan failed to do so? Economic historians recount how extrapolations of Soviet growth in the 1950s and Japanese growth in the 1980s showed those nations surpassing the United States as GDP top dog; that also did not happen.

Pei's view is one of pragmatism and optimism that change will occur but not in the timeline expected by the CPC. The pessimists view, articulated by Michael Pettis, is that debt levels are rising in China and eventually the costs to service debts will outstrip the capacity to service them and that the 20 year experiment in Chinese capital misallocation  without a market pricing mechanism within the financial sector will spell trouble if growth slips below the growth in debt accumulation.

It is clear that with the outflow of financial capital from China will show in changes in the current and capital account.
Rebalancing can happen but are enterprises willing to pay households in a fairer manner or will exploitation of households in favour of subsidizing the tradeable goods sector through an undervalued currency continue?
China continues to lap many nations in terms of labour productivity a rebalancing to a consumption based model will require workers wages to grow faster than productivity unless there is a massive increase in accessible credit for the working classes.
And just as important, interest rates need to be set under a market rate mechanism so that financial repression against savers does not subsidize the borrowers in the upper classes who do not require it and are using that credit access to speculate.

High growth is intoxicating but one needs only a rudimentary understanding of compounding to understand that high single to double digit growth is either a mirage or unsustainable.

Who will take away the proverbial punch bowl and pay household fairly so that household incomes grow faster then GDP and thus make a consumption based model workable.

With the West bracing for two decades of de-leveraging thanks to private sectors repairing balance sheets, zombie banks, and a nod in favour of misguided austerity based on Ricardian equivalence policies that have no empirical justification --not even counting the demographic wall to come in this argument-- the proposal here of  expectations amongst the mainstream that the BRICS in general and China in particular will save the day is a tall tale indeed.
Posted by Unknown at 12:11 AM