It is not necessarily a stock picker's market

Markets are constantly in a state of uncertainty and flux and money is [made] by discounting the obvious and betting on the unexpected.~George Soros

Above is a good video featuring  FT's John Authers warning about correlation, volatility and dispersion and how active management is not a panacea to markets correcting in 2014.
My small contribution centers on the notion of stock picking as a mitigation approach against potential market correction or rather my doubts about its efficacy.
The case for active management hasn't been bolstered by how active managers have perform during past corrections. Equity returns are the result of behavioural factors ("madness of crowds") and macro factors are increasingly important as global financial capital flows from one market to another searching for a return in a low yield stagnating world. In their intriguing book, The Era of Uncertainty- Global Investment Strategies for Inflation, Deflation, and the Middle Ground, Francois Trahan and Katherine Krantz point out:


Investors often have a difficult time explaining the performance of their stock picks. This is largely because they underestimate the influence that macroeconomic forces have on individual stocks.
They search for a connection between returns and earnings or management strength, but the truth is that an overwhelming majority of stock performance is explained by forces that go beyond the income and cash flow statements. In fact, the data show that historically 71 percent of equity returns are explained by macro trends.(Universe = SandP 100)
This means that all of the time stock pickers spend poring over balance sheets and talking with company management accounts for less than one-third of a stock’s performance. How many investment managers would willingly admit that they are investing blindly with respect to two-thirds of the factors driving their portfolio’s return? (Trahan and Krantz, 2011:6)

Does their assertion mean that bottom up stock picking has no value (no pun intended)? No, it does not.

Since Ben Graham invented the idea of security analysis there have been a legion of true believers on what is the right way to pick equities with Buffet and Munger being the most famous exponents. There is value in understanding the fair value of an enterprise; value in considering the strength of management; and undoubtedly value in understanding the balance sheet and income statement as a means of ensuring that an investor has her return of capital before seeking a return on capital. But over and undervaluation is a fact of life generally and asset markets in particular. How many assets are ever at an equilibrium 'fair value'?

If people didn't have differences of opinion then markets would be wholly predictable. They aren't and Keynes's comment that “The market can stay irrational longer than you can stay solvent” remains true to this day. We can cling to an investing style but cannot ignore macro factors.


In our experience, the strong relationship between leading economic indicators and stock price movements make them some of the most important indicators to track. It is no surprise that stocks and LEIs exhibit a tight correlation. LEIs are data series that tend to anticipate changes in economic activity several months in advance. Stocks tend to price in trends in economic growth about six month before they occur, making stocks themselves leading indicators.

The post 2008 figures show that the markets have been on a very good bull run. Will that continue? No one can say with certainty that they will but unless the expansion phase of the business cycle is much longer this time around then previously one should err on the side of caution and conclude that we are in the late expansion phase rather then early expansion. (Note: the 9 year bull runs from 1991-1999 and the 8 year bull run from 1982-1989 may have made us think that buoyant markets are the norm but that does not take into account the liberalizing of capital markets, stripping away of the social contract and the demographic factor of workers in western economies generally).

There is no magic for corporate profitability despite the handsome compensation provided for corporate leaders, either there is: (i) pricing power; (ii) companies can financially engineer and  lever up or; (iii)  they can find efficiency by increasing productivity and reducing costs. It isn't just a supply side story about lowering taxes and making markets business friendly.

This blog has argued consistently that the demand driven element cannot be overlooked and is arguably the real reason behind large corporations reluctance for capex and hiring expansion at home in domestic markets. Stock markets have gone up despite a sluggish growth picture in advanced economies which entails that they have been masters of increasing efficiencies and decreasing costs. 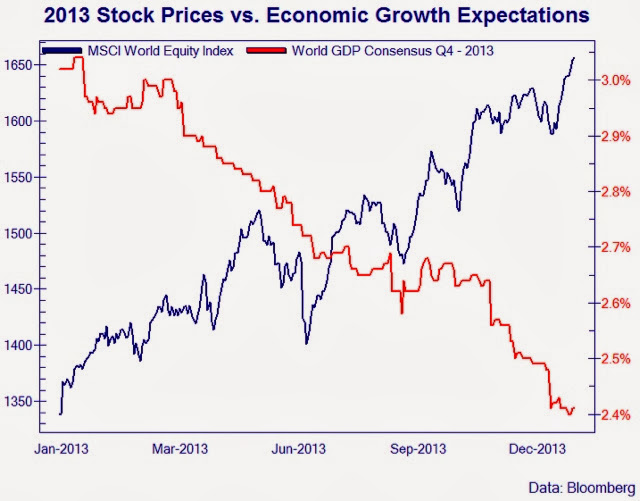 Just how long they can collectively continue to go to the well will determine the legs left in this bull market and the outlook for returns in 2014 and 2015.