Despite C.D. Howe Institute's ministration BOC rates will remain where they are.

The Statistics Canada release this morning stated "The Consumer Price Index (CPI) rose 0.4% in the 12 months to April, following a 1.0% increase in March. Declining gasoline prices were largely responsible for the 0.6 percentage point difference in the 12-month change in the CPI. Price decreases for the purchase of passenger vehicles were also a factor."
This flies in the face of the Paul Masson's C.D. Howe clarion call for higher Bank of Canada rates when the central bank maintains the official line of maintaining a flexible inflation-targeting framework of core inflation at 2% within a 1-3% operating band.

An open question: where does the C.D. Howe Institute want the BOC rate to be by this time next year? In terms of the great bogey man of inflation, perhaps it is concerned about expectations and with it (inflation) being "always and everywhere a monetary phenomenon" hence that call for a pre-emptive BOC hike.


This misses on a fundamental observation that everyone should see (whether they choose to or not is another question). Over the long term, a tighter monetary policy will not help solve the underlying weakness in the Canadian economy --it is but one part of a toolkit of policy measures. The fact that governments increasingly rely on it is emblematic of a deliberate vacuum in the Canadian political economy debate where the voices of reason have been shoved to the side in favour of shills for vested interests.

As has been outlined on this blog on a number of occasions, we continue to have growth in precarious employment, a lack of real income growth for those below the affluent percentile, an increasing reliance on resource extraction, real estate and the low end service sector for job creation while implicitly knowing that the real estate as a driver of GDP growth during the past decade cannot continue forever.

We, as a nation, are back to Harold Innis and W.A. Mackintosh's staples Canada with a pinch of race to the bottom globalization: hewers of wood, drawers of water and servers of French fries.

All of the aforementioned factors ultimately affect demand which in turn should be a driver for where output should be but in the traditional neoclassical view output is always supply side driven and the elusive ‘closing of the output gap’ we’ve been hearing about is, in theory, closing faster than a speeding bullet anytime now, or over the coming quarters…… or not.


Paul Masson's C.D. Howe commentary urging a rise in the Bank of Canada rate is wedded to the rules over discretion role of monetary policy and presumably under a Taylor Rule regime the BOC rate would be ~3.5% (according to back of the envelope calculation)


Professor Masson does make a number of valid points in his paper:
(i) low rates punish households that rely on investment income;
(ii) low rates disproportionately increase the long dated liabilities of pension plans and makes life challenging for insurance companies in particular but financial institutions generally;
(iii) low rates can be a driver for asset price bubbles;
(iv) in the Canadian context low rates have been a cause for 'evergreening' (further leveraging) rather than deleveraging.


While these points are valid, they do remain thoroughly incomplete:
(i) financial repression in addition to inflation is the oldest trick in the book as an alternative to growth to manage debt servicing;
(ii) actuarial deficits are based on a point in time projection and are open to criticism in their methodology but they do not represent a flow that adds to a stock of debt and financial institutions like banks have tractor investments on the asset side of their balance sheet that have shielded them somewhat after the financial crisis but fundamentally lower rates are not good for their net interest margins as they suffer margin compression; (iii) central banks have been deluded into thinking that macroeconomic policy with an inflation targeting framework has been responsible for controlling inflation and the recent run up in assets is the consequence but flow of funds into non productive assets by financial institutions has been going on for the good part of the past 15 years;
(iv) don't forget inequality: pent up demand to consume combined with greater barrier to enter the housing market has created the spike in the debt to income ratio. 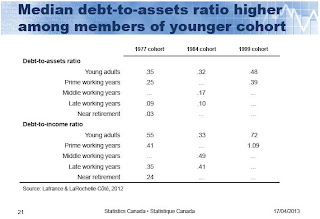 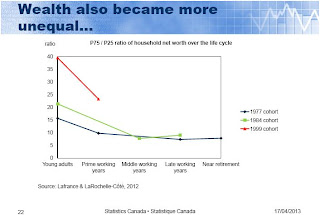 Macroeconomics isn't just about science --when authors claim that it is they are being scientistic not scientific. It is also about recognizing the patterns from yesterday, understanding political and societal realities of today and weaving comprehensible narratives incorporating those elements for policy tomorrow.

At the federal level, Finance Minister Flaherty has pledged to slay the deficit by Fall 2015 and implied in this projection is that this will be done through positive growth rather than cuts. But what happens when the household and government sectors deleverage at the same time (as the former will have to do the latter has pledged to do)?

When you combine this with the demographic dilemma of an aging population in Canada and its Western trading partners --think of the Eurozone in particular but also China and eventually the United States-- for which there is no palatable prescription and  you will realize that there is little scope for monetary policy to be anything but accommodative at this time and into the medium term.

Policy makers have snookered themselves; raising rates would pre-emptively cause a severe recession with possible debt deflation consequence as a worst case scenario. This does not preclude the possibility of a rate hike in 2014 --stranger things have happened; think back to John Crowe's tenure as BOC governor-- but if that were to happen then expect a retracing back to 1% thereafter upon realization of the policy error.
Posted by Unknown at 3:44 PM