Too little, too late, EU remains on the wrong track

In its annual verdict on national budgets of all 27 EU members France,
Spain and the will be given a waiver on the annual 3 per cent deficit limit. will also free from intensive fiscal monitoring despite its new prime minister’s decision to reverse a series of tax increases imposed by his predecessor. EU eases hard line on austerity.

This is fine but ultimately theatrics. Europe's policy makers have enabled an initial recession --that was triggered by the irresponsibility of the continent's banking sector-- to turn into a depression all for the ostensible purpose of adherence to a sound finance regime that was consistent with the Treaty. We see the result in the massive unemployment numbers, particularly amongst youth in the periphery.
This is what a depression looks like:


Policy prescriptions that wish to mimic the austerity experience of Canada in the 1990s would do well to remember the following:

Is there a flexible exchange rate to help with adjustments?
See how the Canadian dollar fared with the US dollar during the period 1990-2003.

Is your main trading partner growing?
After the downturn at the end of the G.H.W. Bush era the United States experienced strong growth during the Clinton terms, enabled in no small part by the flood of capital to replenish the nation's fixed capital stock during what would be called the tech boom.

How is your main trading partner's labour market?

Robust in the case of the United States during Canada's austerity drive (see the line representing Clinton). 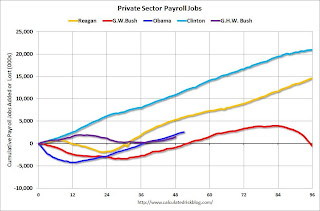 How is your main trading partner's fiscal house?
National debt as a percentage of GDP improved during the two Clinton terms.

Austerity is tough medicine but for a small open economy like Canada's it was made possible thanks to external factors. The biggest factor being that its main trading partner, the United States, was in a healthy situation and the destination for its exports and Canada was able to depreciate its way to growth with the CADUSD exchange rate hitting 0.63 in 2003. Concurrently, the following happened below:
Canada's Balance of Trade (1990-2003)

﻿Government Debt to GDP peaked in the mid 1990s to come down once growth was re-established.

Federal Budgetary Balance: Government had its fiscal house 'in order' so to speak by the turn of the century.

None of this will happen in the Eurozone. The peripheral nations have been sent to purgatory with little hope of emancipation; those wishing for structural reform as a result of the troika's edicts fail to recognize that such reform is an issue of political economy that the sovereign nation's body politic must come to grips with --it isn't something that will be solved by narrowly restrictive policy tools.

I will use Rob Parenteau's words to sum up as he was one of the original analysts who warned of the dire consequences of austerian policies (the full deck can be downloaded from this page).