Times change, and so do Canadian expectations...

In a post from last September there was surprise on the part of your blogger as to why the dealing community was so bullish in terms of expectations for the Bank of Canada raising benchmark interest rates this year (2013). Anyone that has followed the musings and scribblings of your humble scribe is aware of his reticence in conceding to the inexorable upward movement of rates as in times past; to wit, as has been argued on a number of occasions, this time --barring a co-ordinated global restructuring and co-operation by the G20-- is different from previous business cycles where rates have risen in a lock step fashion with the business cycle.

But times change, and so do Canadian expectations... 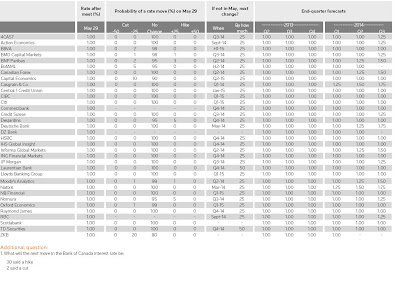 The median end of quarter forecasts see no change in BOC rates from the dealing and analyst community. Indeed, the median and mode forecasts for the BOC benchmark rate in 2014 is 1.00% -- exactly where it is right now. Of course, this does not preclude the possibility of a rate hike in 2014. We live in the real world replete with uncertainty --it can be of either the Knightian or Keynesian brand-- not the imaginary world of rational expectations. But fundamentally, the dealers and analysts are seeing the same data that you and I are seeing:


Canadian economic activity was weaker than expected in 2012. On an average annual basis, real GDP grew by 1.8 per cent, compared with the 2.4 per cent projected in the April 2012 Monetary Policy Report The most important contributors to this unexpected weakness were exports and, to a lesser extent, business fixed investment, the effects of which were only partly off set by higher inventory investment and weaker imports (Chart 4-A) Government expenditures and household spending were roughly in line with expectations. [emphasis added] 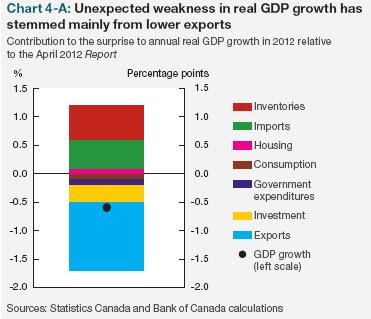 For example, Canadian exports of non-energy commodities to China and other emerging-market economies (EMEs) have become more significant to Canadian trade in recent years EMEs recovered relatively quickly from the global recession, but their economic growth was weaker in 2012 than the Bank had expected Finally, competitiveness challenges may also have played a role, with the Canadian dollar remaining strong and productivity growth weak 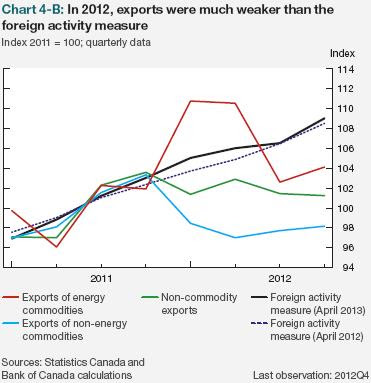 Approximately two years ago, the BOC was making the bet that despite consumption tapping out the household sector and the government committing to fiscal retrenchment, a driver for sustained growth to close the output gap would be the business sector coming to the fore and stepping up with capital investment. This hasn't happened. 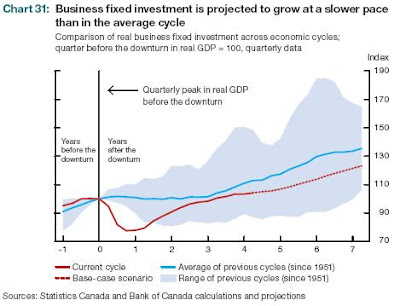 At the most basic level, notwithstanding headwinds from global dynamics, this is an incipient flow of funds issue. Why would the business sector invest without seeing the concomitant demand domestically. In turn, larger businesses are able to tap capital market to exploit return on otherwise moribund cash.

Marc Lavoie and Mario Seccareccia have framed the dynamic in their presentation "Competitive Pressures in the Banking Sector, Perverse Incentives, and Financial Stability: Understanding the Canadian Experience"


Instead of industry being the net borrower vis-à-vis the banking sector, growing profits and retained earnings associated with fairly flat business investment have slowly transformed (or “rentierized”) the non-financial business sector itself into a net lender that seeks profitable outlets that provide high financial returns for its internal funds (see Fig. 2 below). 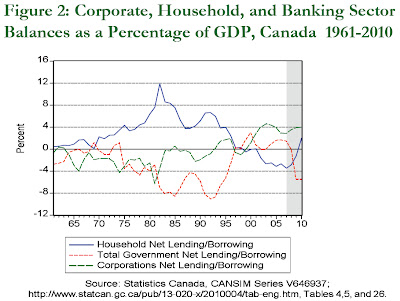 On the other hand, households have become net borrowers and have thus become an additional source of revenue for business enterprises from the increasing net spending of the household sector.
Banks have become financial conglomerates engaged in lucrative investment banking by layering their assets, engaging in cross-boundary arbitrage, and loosening credit by permitting the household sector to take on an increasing debt load without a concomitant rise in real personal disposable income. [emphasis added]

Without the rise in real incomes the stock of rising debt will have to be serviced for years to come. The younger demographic cohort needs to service that stock of debt with a flow of income that isn't rising as fast as the real cost of living (that incorporates supply side shocks of rising food, transportation, and childcare costs for those with families).

The older demographic, likes cohorts before them, will not have the same propensity to consume as they did during their working years and the rise in the dependency ratio is just beginning in Canada.

We cannot grow indefinitely by relying on Canadian households increasing their borrowing relative to income. Nor can residential investment remain near a record share of GDP, particularly given signs of overbuilding and overvaluation in segments of the real estate market. [emphasis added]

The irony --if one can call it that-- is that the aggressive monetary easing has snookered the small open economy that is Canada into a corner. The underlying fragility of the household sector cannot withstand a 400 basis point rise in interest rates that have been characteristic during past recoveries but neither does the central bank want to encourage more borrowing in light of a policy of easy money in an uneasy world.