Can Germany be weaned off the export driven growth model?

In a Project Syndicate post from April 23, Should Germany Exit the Euro?, Hans-Werner Sinn laid out his arguments for continued austerity, against eurobonds, and the rationale that the Euro periphery, particularly Greece, Portugal and Spain, would have to become 20-30% cheaper. George Soros immediately posted a riposte to Sinn's assertions which can be followed at the side of the original post.

Hans-Werner Sinn’s response confirms my fear that the euro will eventually destroy the European Union. The longer it takes, the greater the political damage and the human suffering – and it may take a long time. Given that the way the euro is currently managed puts the “peripheral” countries at a serious competitive disadvantage in terms of their access to capital, they are condemned to a lasting depression and a continuing decline in their competitive position.


As Sinn says, Germany will not accept Eurobonds. The German Supreme Court has indicated that Germany will require a referendum before Eurobonds can be introduced, and it is currently considering whether the European Central Bank has exceeded its powers. The Bundesbank has submitted a brief that criticizes the legitimacy of some of the ECB’s recent actions. It argues that, under the German constitution, the ECB is prohibited from making any decisions that impose potential liabilities on German taxpayers, because it is not subject to German parliamentary control.
A decision in favor of the Bundesbank would put the periphery position in an even more dire position. It is bound to strengthen anti-European sentiment. If current policies persist, they are bound to lead to the disorderly disintegration of the EU. Surely that is not what Germany wants.
I do not agree with all of Sinn’s arguments, but there is no point in getting bogged down in the details. The point is that the current state of affairs is intolerable. Sinn claims that the root cause of the euro crisis is that the Mediterranean countries are not competitive. If he represents German public opinion correctly, a mutually agreed breakup of the Eurozone into two currency blocs would be preferable to preserving the status quo.
The division of the euro into two blocs would cause serious dislocations. Germany assuming the role of a benign hegemon would benefit everyone, but that seems to be unattainable. The division of the euro could save the EU, provided that the periphery retains possession of the euro. Given that their debt is denominated in euros, this would enable them to avoid a default that would destabilize the global financial system. And France, in its current competitive position, would be better suited to act as the eurozone’s leader, rather than to remain a passenger in a car driven by Germany.

Michael Dauderstädt is even less diplomatic in his assessment of Germany's policy reaction in this thoughtful policy analysis piece, Germany's Economy: Domestic Laggard and Export Miracle,  from April 2012.


is largely responsible for the duration and depth of the crisis. If the German government had endorsed mutual responsibility of all Eurozone governments, a common European bond (eurobond) and an active role for the ECB in the bond markets and as lender of last resort, the crisis would have ended immediately in May 2009. ’s reluctance to save and other highly indebted euro-countries (, and ) increased the panic of the financial markets and thus the cost of any further rescue package. ’s (as well as the EU’s and the IMF’s) insistence on austerity policies in the GIPS countries exacerbated the crisis. The ensuing recession there reduced their capacity to service their debt and increased the crucial debt/GDP ratio (by lowering the denominator).

Recession or even depression now loom in the Eurozone. In late autumn 2011, a new banking crisis similar to the Lehmann crisis of 2008 threatened to happen. The banks which have relied on government bonds as collateral were close to losing their creditworthiness. Rating agencies downgraded first Eurozone states and then Eurozone banks. A crisis could be averted only by massive injections of liquidity by the ECB and other central banks. The corporate sector and households are affected by the credit crunch. Growth forecasts for the EU and for the global economy have been revised downwards. For an export junky such as this forebodes a painful decline in sales.

Here are some charts that illustrate Germany's export dependency. 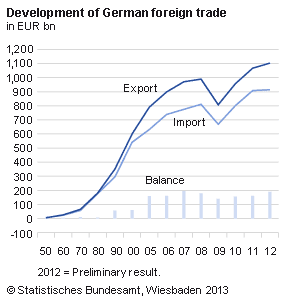 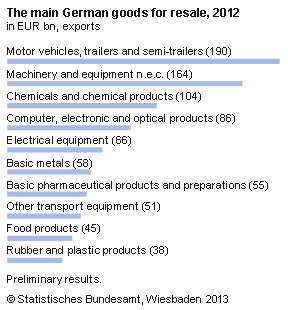 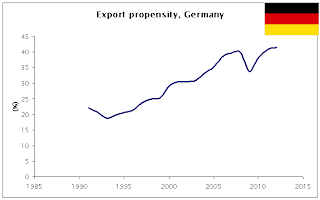 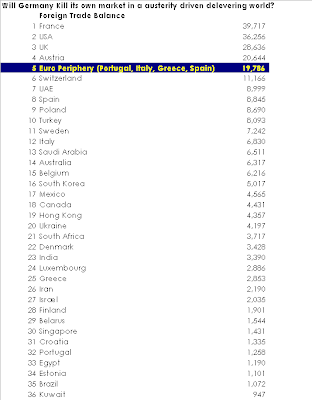 All data from Statistisches Bundesamt.

More on this issue --export dependency and current account imbalances-- in a future post.
Posted by Unknown at 5:02 PM